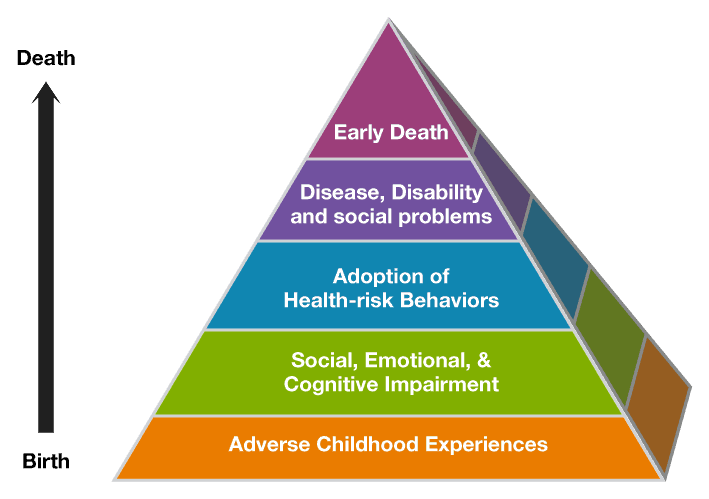 Colette’s childhood was riven with adversity. She had to deal with all ten ACE – adverse childhood experiences – criteria. We now know that these early adverse experiences of ‘intense, frequent, or sustained stress – without the buffering care of a supportive adult – can change children’s brains and bodies, including disrupting learning, behaviour, immunity, growth, hormonal systems, immune systems, and even the way DNA is read and transcribed’ (centerforyouthwellness.org). Trauma, then, was present in Colette’s life even before she was born. Her father suffered from a rare and serious condition which meant that he was in hospital for the duration of her mother’s pregnancy. The doctors were surprised that her parents had been able to conceive, given the medication that her father was taking. Although he went into remission just weeks before Colette was born, three years later he was diagnosed with a brain tumour which rendered him paralysed on the left side. When Colette was 13 her father died. Colette continued to suffer great loss: both of her two siblings and two close friends died.

These traumatic life experiences have manifested themselves in a variety of physical and emotional conditions. Since puberty she has dealt with PMDD (premenstrual dysphoric disorder), an extreme and debilitating form of PMS (premenstrual syndrome). She has also suffered from PTSD (post-traumatic stress disorder), tinnitus, chronic frozen shoulders – which meant she was housebound for four years – asthma, eczema and osteoarthritis. Colette has found that during her many encounters with doctors, she never received an explanation of the causes of her conditions. Given that, she decided to undertake her own research. Colette is now convinced that the root cause of her conditions is the negative impact which trauma has had on her autonomic nervous system.

Colette has received medication and psychotherapy for many years. However, a few years ago she was introduced to TRE by Vicki Cook, founder of TRE Scotland. TRE is a method that activates the body’s natural mechanism of shaking or vibrating that releases muscular tension, calms the nervous system and encourages the body to return back to a state of balance. Colette has been practising TRE ever since, and both she and her doctors have noticed marked improvements in all of her conditions. She is no longer on medication and nor does she need to see her psychotherapist. Socially, she is noticing that her PTSD symptoms are easing; she now feels able to leave the house more readily, enjoys spending time with dogs, goes for long walks and gains pleasure from social interactions. She is feeling strong enough to assert social boundaries in her life, no longer spending time with those people whom she feels are a negative influence. TRE has addressed her autonomic nervous system and this has led to an improvement in both her physical and psychological state.

Not only has Colette learnt and been regularly practising TRE, she has studied to become a qualified TRE provider. She is now working as part of the TRE Scotland team. Colette is in a unique position now: she is bestowed with a lifetime of experiences and lived understanding of the effects of trauma, and, with her knowledge of TRE, she is able to use these experiences to guide others who are also suffering from trauma in their own healing journey. In the wake of the recent explosion of understanding about ACEs, Scotland has declared itself a soon-to-be ACE-aware nation. Colette will surely play an integral part in this trauma-informed movement.

Childhood trauma isn’t something you just get over as you grow up. Pediatrician Nadine Burke Harris explains that the repeated stress of abuse, neglect and parents struggling with mental health or substance abuse issues has real, tangible effects on the development of the brain. This unfolds across a lifetime, to the point where those who’ve experienced high levels of trauma are at triple the risk for heart disease and lung cancer. An impassioned plea for pediatric medicine to confront the prevention and treatment of trauma, head-on.